New Jersey-based Team CYNET.ai was selected by DARPA (the Defense Advanced Research Projects Agency) as a qualifier in its ground-breaking SubTerranean Challenge (SubT). SubT is a multi-million dollar competition that will task teams of robots with autonomous exploration deep beneath the surface of the Earth. 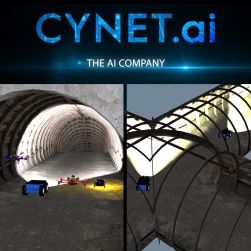 After a few months of developing software for the qualification process, Team CYNET.ai was one of the only 9 teams around the world chosen to continue through the virtual track of the competition. Other competitors include NASA, CalTech, MIT, Carnegie Mellon, Georgia Tech and several robotics companies. Most of them are being funded by DARPA. Team CYNET, sponsored by Middletown, NJ company Jersey Media Network is self-funded and doesn’t benefit from the availability of university labs.

Complex underground settings present significant challenges for military and civilian first responders. The hazards vary drastically across domains that can degrade or change over time and are often too high-risk for personnel to enter. Teams from around the world were invited by DARPA to propose novel methods for tackling these time-critical scenarios through unknown courses in mapping subsurface networks and unpredictable conditions.

The competition has two main tracks – a Systems Track that involves physical robots that have to navigate the underground environments, and a Virtual Track which is entirely simulation-based and is focused on developing algorithms for subterranean exploration. Team CYNET.ai is participating in the virtual competition.

“DARPA’s competitions are about ground-breaking innovations. About 15 years ago, they were running the Grand Challenge for autonomous vehicles navigating an unknown desert route. Once a winner emerged after a few years, it become the basis of what we know today as self-driving cars. The SubT Challenge might one time be remembered as the source for underground search and rescue bots, whether it is a cave, a subway tunnel, or a mine”, said Chris Fotache, captain of Team CYNET.

Team CYNET is using very recent innovations in robotics, computer vision and neural networks. The biggest challenges in this competition are the fact that there’s a completely unknown, dark environment that the robots have to discover and explore, that there are artifacts that have to be detected and reported, and that underground communication is very difficult. “Our proprietary algorithms tackle each of these problems, and being a small team we are confident we can just get it done, without the overhead and theoretical groundwork of the major competitors we are facing”, added Fotache. The other team members include roboticists Subhas Das and Shakti Dhar Sharma.

The next phase of the competition takes place in late summer 2019, and involve exploration and discovery in a vast tunnel system. Then in 2020 there will be additional challenges involving urban undergrounds and cave networks. For more information about Team CYNET.ai, please visit www.cynet.ai/subt. Team CYNET is looking to form partnerships and welcomes any kind of financial and equipment assistance in order to compete with the major institutional teams. Sponsors will get exposure in our media, demos, videos and tech articles.