While New Jersey currently ranks 48th in breweries per capita (PA is 22nd and NY is 28th), come spring of 2016 the Garden State will have a brand new brewery. Monmouth County residents Pete Artherholt and Mike Skudera of Tinton Falls and Chris Hanigan of Red Bank are taking their passion for great tasting craft beer and opening Jughandle Brewing Company in Tinton Falls.

Conveniently located a half-mile from Parkway exit 102 and just minutes from the Jersey Shore Premium Outlets, Jughandle Brewing will occupy over 3,000 square feet of space in the Tinton Falls Centre Plaza located at 4057 Asbury Avenue. The facility will be able to produce up to 4,000 barrels (31 gallons per barrel) of high-quality craft beer annually and will be open to the public for tours and tastings.

“We will offer 6 craft beers on tap and plan on expanding to 14,” says Pete Artherholt, a former chemist with over 15 years of brewing experience. Through Artherholt’s wife Darlene, who has a master’s in microbiology, the group has access to knowledge and skills that are usually acquired only when breweries expand and become better established. “Having a strong science background will help drive consistency and quality control in the craft beers that we sell.”

Visitors to the brewery may also take home bottles and cans and fill larger growlers (32 or 64 ounces of beer). “Our craft beers will be made using natural and high quality ingredients and we are looking to use local products when in season,” says Chris Hanigan who has been brewing for more than a decade and works as a corporate art director. “Customers can expect to sample a diverse style of beers, which will rotate with the seasons and include an IPA, Saison, Imperial Stout, Hefeweizen, Sour, and Brown Ale, to name a few.” 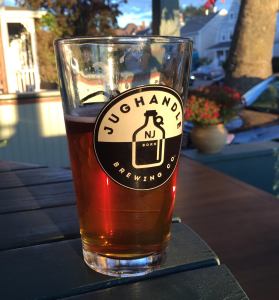 “We will be open to the public for tours and tastings on Fridays and Saturdays with plans to add additional days in the future,” says Mike Skudera, the company’s business strategist who is a corporate technology manager and the former mayor of Tinton Falls. “We also plan on having our craft beers served in local restaurants and bars.”

Jughandle Brewing was approved by the Tinton Falls Zoning Board in September, received its Federal Brewers Permit in October and is currently pending licensing by the State of New Jersey, which is the final process before brewing operations may begin.

NJ breweries are not permitted to sell food; however Jughandle Brewing Company is in a plaza that has pizza, wings, sandwiches, Chinese and Mexican foods and even a bakery, so visitors will not go hungry. 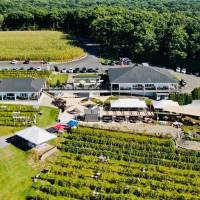