On November 13th I had the pleasure of attending for the first time the NJ Hall of Fame induction ceremony. The Class of 2014 was inducted at the Asbury Park Convention Hall, and it was a very fun night out. I was there as a member of the press, and covered both the red carpet arrivals and the show itself. I have to thank NJ Discover for taking me with them, since the organizers don’t accept simply bloggers, just accredited organizations.

The most popular red carpet guests were cast members from the Sopranos. Vince Curatola (Johnny Sacks) arrived first and was very friendly with the media. Then Aida Turturro (Janice Soprano) spent a lot of time really loving the attention and talking to everybody. Vincent Pastore (Salvatore “Big Pussy” Bonpensiero) was also cool and not in a rush to leave his media friends. The FBI Agent Guy slipped unnoticed since nobody knew who he was. Tony Sirico (Paulie Walnuts) was last to arrive and while friendly as well, he seemed to be still in character.

This was either a Sopranos reunion, or maybe the media just wasn’t familiar most of the other special guests. It was a funny moment when a lady reporter who just interviewed someone asked me who that was. After she interviewed him for a few minutes?? She admitted she kept asking generic questions. I told her it was bestselling author Harlan Coben. Maybe I should’ve said it’s Michael Vick and then have fun watching their coverage. Seems like we’re moving from low information voters to low information journalists. Like I said, my blog is not an accredited news outlet, so I’m not an expert in the field, but at least when I received a media advisory, I do a Google image search on everyone, to make sure I recognize them.

Brian Williams from NBC flew by the red carpet media, and was only “ambushed” near the entrance to the VIP room. He then spent a lot of time in that cramped space talking to reporters. Maybe he’s just not familiar with the red carpet protocol like the other TV stars, who are used to linger from mic to mic and from camera to camera.

Some New Jersey politicians, like Senators Joe Kyrillos and Jennifer Beck, walked the red carpet and spoke to the media. Others, like Dave Rible or Declan O’Scanlon, mingled with the crowd.

As he was walking to his seat, I asked Tony Sirico to take a photo together. He responded “Yeh, yeh, let’s do this selfie sh!t”.

As the show started in the Paramount Theater, I really liked the band. No idea who they are other than the “Hall of Fame Band”, but they were very entertaining. They opened with a mix of Jersey-related hits, which ended with MC Vince Curatola singing for a little bit – and his coolness factor went through the roof.

NFL Vice President Howard Katz was inducted by Olympics producer for the NBC, Dick Ebersol. Katz is in charge with scheduling and apologized for too many Sunday night blowout games recently…

The induction of disgraced former Governor Jim Florio might’ve been a surprise, since most would see him rather qualified for a Hall of Shame. Maybe Corzine’s term saved him from the title of “worst NJ Governor”. And he saved face by taking a shot at President Obama. How bad can it be when Jim Florio says you lack skills and leadership?

Two civil rights leaders were also honored. One of them was the late Peter McGuire, presented as the “father of Labor Day”. The other one, Elizabeth Cady Stanton, was introduced by Lt Gov Kim Guadagno, who praised her as a leading suffragette, but didn’t call her the “mother of women’s vote”.

Basketball great Patrick Ewing was inducted but couldn’t attend, being currently involved with the NBA season. Ewing won several high-school championships in NJ before playing for the Knicks and being part of the Olympic “dream team”. He sent a recorded message in which he repeated several times “I am very honored. And I am pleased.”

Pioneering group “The Shirelles” was inducted in the NJ Hall of Fame, with its two surviving members accepting the honors. They were introduced by a very gracious and emotional Dionne Warwick, who also sang one of The Shirelles’ hit songs.

Another musical legend, Dizzy Gillespie, was inducted by Max Weinberg. There was a cool memorial movie, and then the band played a mix of his trumpet sounds.

New Jersey Governor Chris Christie didn’t attend the ceremony, but maybe he would’ve, if he knew about Bruce Springsteen being a surprise presenter. He showed up to introduce Brian Williams, who he considers a close friend, and most of the people in the audience expected him to give a short performance. Vince Curatola even teased the crowd by suggesting that, but it all ended in disappointment. 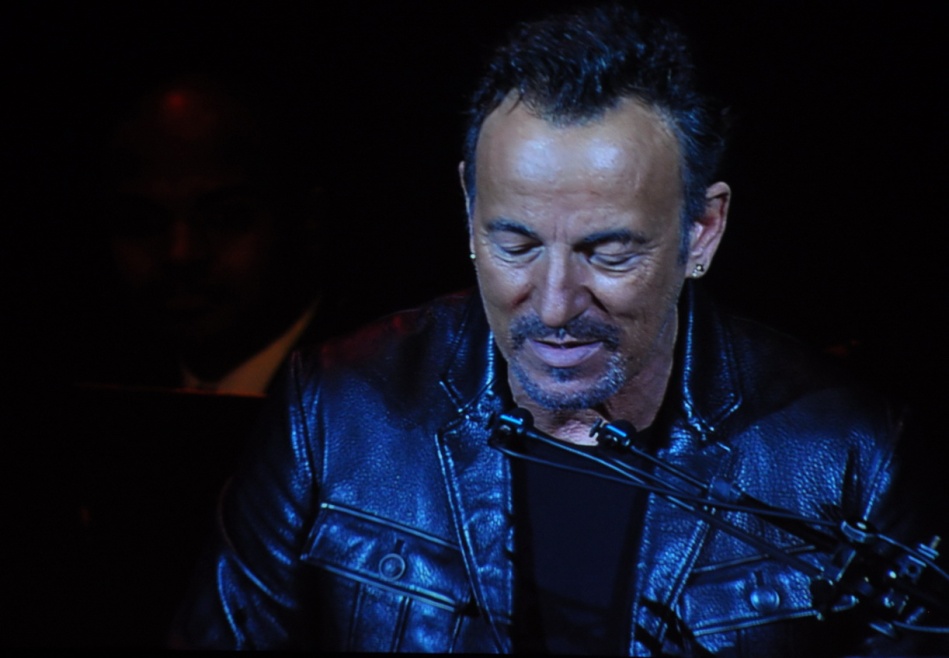 Brian Williams, host of the NBC Nightly News, spoke about his Middletown origins, his days as a volunteer firefighter, his friendship with The Boss, and also about his rebellious youth when he was stalking his idol Springsteen, following him from Tradewinds to the Stone Pony. He also mentioned he reported from Camden to Kandahar, without saying which was more dangerous. Williams said that before coming on stage, Vincent Pastore told him “he’ll be made tonight”.

The Sopranos reunion finally took place, with Vince Curatola, Tony Sirico, Vincent Pastore, Aida Turturro and Guy Who Played FBI Agent got together for an emotional tribute to James Gandolfini. They came like one big Italian family and presented the honors to his widow, Deborah Lin.

You can see more pictures in our Facebook album.